The set.dir command sets the direction of motion for an object.

The direction of screen object oA is set to the value of variable vDIR, which should be >= 0 and <= 8. 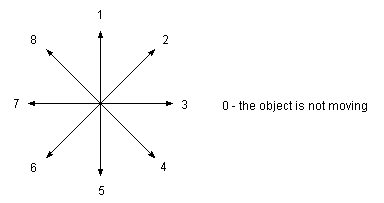 Changing the direction does not change the movement mode. For move.obj, move.obj.v and follow.ego modes, changing direction with set.dir doesn't work, because AGI will automatically change direction back to keep the object moving toward its target.

You cannot set the ego object's direction with the set.dir command, not even when it is in program control mode. To change ego's direction, you have to change the value of reserved variable v6 (ego direction).

AGI does not check that object number oA is a valid screen object. If it is not, this command will overwrite other data on the memory heap, which may cause unexpected results, including possibly crashing AGI.